The year 2014 marked a significant growth in mass understanding of the threat posed by gentrification, placing long-time residents of Boston’s urban neighborhoods at risk.   Key developments were the growth of mass actions targeting corporate interests promoting gentrification and displacement; awareness and education campaigns reaching large numbers of activists; the adoption of anti-gentrification goals and strategies by the new Mayor; and a new connection made between fair wages and gentrification organizing.  To consolidate and build on these gains, it will be important for the anti-gentrification movement to take even bigger steps forward in 2015. 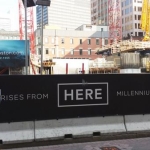 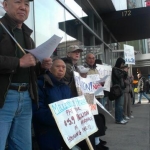 The number of mass actions targeting business interests promoting displacement grew.  High-rise luxury development, with predictable displacement effects on low- and moderate-income residents, was concentrated in the downtown area near Chinatown.  The Chinese Progressive Association, as in 2013, led education and action campaigns around corporate gentrifiers.  The chief target was the Millennium Tower development.

Seizing on the results of an audit of the Boston Redevelopment Authority, in May 2014 CPA organized several actions. The audit found that the Millennium developer was unable to pay its affordable housing fee or to meet the city’s Boston Residency Job Policy calling for city residents to fill at least 50% of construction jobs, despite having $13 billion in assets. 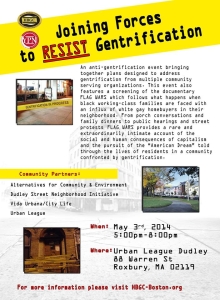 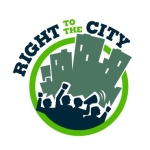 “Fighting for Democracy Justice &
Sustainability in our Cities”

The Boston Right to the City coalition, affiliated with the national Right To the City, initiated a number of awareness events and mass media conversations on gentrification.  The local Boston Neighborhood Network News broadcast “A look at gentrification in Boston and New York”, a conversation with Andrew Padilla, director of El Barrio Tours (a documentary film about gentrification in East Harlem) together with Right To The City coordinator Darnell Johnson.

Nuestra Comunidad continued our advocacy around gentrification.  In October 2014 we launched a social media awareness campaign, inviting residents to photograph and tweet/instagram/facebook photos of themselves and neighbors, like this.

Brooklyn activist Imani Henry began the #TakeItBack selfie campaign, and activists in several other cities have adopted it in their communities. 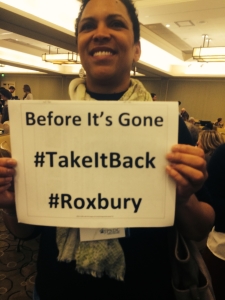 Other local community development corporations have begun to lead anti-gentrification efforts in their neighborhoods and at a policy level.  At the October 2014 biennial convention of Mass Association of CDCs, over 150 people attended a workshop on gentrification featuring presentations on CDC campaigns by leaders from Jamaica Plain NDC and Codman Square NDC.  A “gentrification learning community” began in 2014, bringing over 40 community development activists together in a year-long learning process.  The participants come from a broad cross-section of organizations, including CDCs and funders such as Boston LISC and the Barr Foundation.

In October 2014, CPA launched “R Visions”, a community campaign aimed at establishing moral site control over the remaining publicly owned vacant land in Chinatown, with the ultimate goal of developing affordable housing there.  R Visisons featured a week of arts interventions on this land with arts performances by hundreds of artists, residents and youth.  To see one example of these multilingual audio and visual installations, a dance performance by Chien-Hwe Carol Hong of 1000 Virtues Dance Company, go to http://urlin.it/12d0b2

The fight against corporate landlords became an emerging battleground against gentrification. A very successful housing rights action organization, City Life/Vida Urbana, gained new support for its campaign against corporate landlord City Realty. Many of this company’s 600 apartments were purchased in neighborhoods such as Roxbury and Dorchester after foreclosure during the recession.  As the local market has rebounded, City Realty has gouged tenants with large rent increases. Numerous tenants have reported monthly increases of hundreds of dollars, with one reporting her apartment is being listed for an additional $1,000 per month while her eviction is in process.  Separately from the City Realty campaign, the Chinese Progressive Association in 2014 documented cases of tenants facing displacement due to rent increases in more than 10 buildings, an outgrowth of the more than 3,000 luxury units approved or built in Chinatown in the past few years. 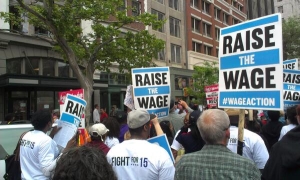 The fair wages movement in Boston tied income inequality to displacement.  Led by coalitions of unions and community organizations, the fair wages activists in 2014 began to argue that fair wages can help workers avoid displacement due to rising rents.  Fair wages became an issue pressed by anti-displacement organizes against luxury developments.  For example, the Chinese Progressive association has demanded that the Whole Foods store in the new Ink Block luxury development in the South End commit to local hiring and fair wages.

Elected officials take heed. Faced with growing protest and public awareness of displacement, some of Boston’s elected officials have supported the anti-gentrification action campaigns and embraced specific strategies.  City Councilor Tito Jackson, whose district is Roxbury, organized an October 2014 City Council hearing on displacement by corporate landlords.  Councilor Jackson proclaimed to the audience of hundreds of tenants, “This should not be a city that’s only made up of million-dollar condos and million-dollar homes.  The objective is to hear all aspects of what is going on, and then look at the possible solutions that would lead us to a city where people who have been here through the hardest times are here through some of the best times that are ahead of us.”

Boston’s new Mayor, Marty Walsh, embraced the anti-gentrification movement in his long-term housing plan released in October 2014.  The report documented displacement of low-income households in six of Boston’s fifteen neighborhoods and displacement of middle-income households in four.  It noted some of the economic pressures behind displacement. Only 9 percent of the city’s rental housing listings are within reach of households with incomes of $50,000, and only 1 percent are affordable to households earning $25,000.  Rents are increasing five times the rate of income.  A middle-income household earning $80,000 cannot afford the bottom quarter of Boston’s homeownership market and can afford only half of current rental listings.  A steeply rising population will squeeze rents and home prices even higher, with 91,000 new residents making up 49,000 new households anticipated by 2030, bringing Boston’s population to 700,000.

The Mayor’s “Boston2030” plan adopts four specific anti-gentrification strategies advocated by Nuestra Comunidad and other.  (See my post at http://urlin.it/59ad8).  These key strategies are:

Build 20,000 middle-income homes in order to create mixed-income neighborhoods, with government assistance for renters and buyers in the $50,000 to $90,000 household annual income range, accompanied with long-term affordability restrictions.  The plan calls for zoning incentives, the creation of “growth districts”, tax incentives and streamlined permitting to boost production for incomes from $90,000 to $125,000, the upper range of the Mayor’s definition of middle-income or “workforce” households.

Expand homebuyer assistance to create 5,000 new homeowners.  This goal is also intended to help address the persistence of Boston’s racial homeownership gap.  Citywide 35% of homes are owner-occupied, but that ownership percentage is only 23% in Roxbury.

Set aggressive production goals.  The Mayor’s plan estimates that in order to meet anticipated new demand and stabilize the market (defined as reaching 4% vacancy rate), another 53,000 housing units will be needed by 2030.  To accomplish this ambitious production target, the Walsh plan calls for building government-assisted homes for families and seniors at a mix of income categories; using zoning and public land incentives for unsubsidized development of housing for the “upper” middle-income range; and building new student dormitories that will free up much of the private housing stock now occupied by students,

There’s more movement-building to do in 2015.  Recent successes in raising awareness of displacement and identifying specific anti-gentrification strategies in Boston should lead to new organizing opportunities in 2015. Here are some 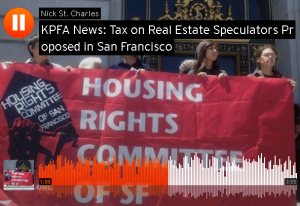 Keep the pressure on corporate gentrifiers. The Boston anti-gentrification movement has identified the real causes of displacement by focusing action campaigns against powerful actors who are carrying out plans inevitably causing displacement, such as Millennium and City Realty.  It is important to keep attention on these and other powerful corporate interests behind gentrification.  One way could be a campaign to penalize displacement, such as a tax penalty for speculation as proposed by the housing movement in San Francisco.

Propose zoning changes that will mitigate displacement. The City has announced its intention to create zoning districts that will encourage middle-income housing production.  Rather than wait for proposals, Boston’s anti-gentrification movement should propose complementary zoning changes aimed at preventing displacement.  One example would be allowing density bonuses only for providing more affordability; this could prevent very dense luxury housing development along transit line stops in or near vulnerable neighborhoods. Another strategy could be advocacy for community stabilization zones, using public land to build affordable housing in at-risk districts. 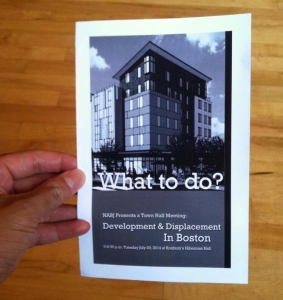 Organize to get at the table when decisions are made. As I have argued before, measures are needed to place more power in the hands of community residents opposed to gentrification.    A key “power strategy” could be to advocate for a city policy requiring appointment of tenants and low-income residents to development review bodies in proportion to their presence in the community.  The policy should also require representation on every review body of advocates of anti-displacement policies.  Under the current practice in Boston, low-income tenants and anti-displacement advocates are often absent from review committees, allowing voices to go unchallenged opposing the very measures needed to prevent displacement.

Support mixed-income developments in at-risk neighborhoods. A model of mixed-income anti-displacement development is Nuestra’s own Bartlett Place.  Located in the heart of a gentrifying neighborhood, Bartlett Place will provide over 300 new homes, including 129 for-sale homes. The income mix will be 1/3 low-income, 1/3 middle-income and 1/3 market rate, the “holy grail” mix desired by a large majority of the community.  To our knowledge, no other developer in the Boston area has developed a feasible plan to achieve the 1/3-1/3-1/3 goal.  In addition to permanently affordable homes, the contracting, jobs and small business opportunities at Bartlett Place will be structured to empower local residents and entrepreneurs to seize opportunities and equity rather than suffer displacement. With a recent award of $2.4 million in state infrastructure funds, construction will begin in 2015.

If you live or work in Boston, please join the local anti-gentrification movement.  Connect with Nuestra Comunidad or another organization fighting displacement, and follow the conversation @NuestraDavid.