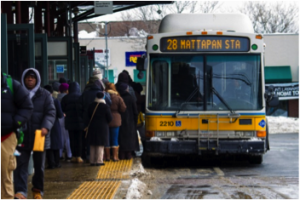 I spoke this summer with a 20-something woman who works in the Jackson Square area of Roxbury and lives in Mattapan Square, about 4.5 miles away. It takes her over an hour to get to work each morning using the MBTA bus. She uses the 28 and 22 bus routes which run along Blue Hill Avenue through the heart of Mattapan, Dorchester and Roxbury, all working class communities and Boston’s largest communities of color. That corridor is transit deficient, with buses in need of improvements, slowed down by street traffic and 92,000 people unable to walk to rail transit.

In contrast, someone who lives in the Readville section of Boston, a majority white neighborhood, can travel the 7.3 miles to Jackson Square in around 30 minutes, using commuter rail and the Orange Line subway. 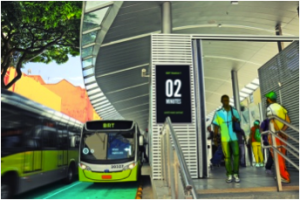 These examples are part of a larger, well-documented pattern of systemic disparity in access to good transit in metro Boston. According to a study by Northeastern University of commuters, African-American bus commuters spend an extra 66 hours a year travelling to and from work compared to white bus riders. African-American bus riders have an average one-way travel time to work of over 46 minutes, the longest of all the groups studied.

What could be done to undo this systemic disparity in our transit system? One strategy is to build more affordable housing near transit stops. (That will be the subject of a future blog post.) Another strategy is to create a transit oasis by changing the way we think about and experience buses. Imagine, what if your bus did not have to wait in traffic and could get you where you needed to go efficiently and on time? Bus Rapid Transit, or BRT, could help turn that into a reality.

The transit oasis potential of bus rapid transit. About two years ago I joined a diverse group of metro Boston transit experts, including grass-tops community leaders, who formed a bus rapid transit study group. Through the Barr Foundation’s assistance, in-depth technical analysis was provided to this group, to make sure its recommendations had the highest credibility possible. The study group’s report released earlier in 2015 concluded that BRT has the transformative potential needed by our communities in metro Boston. Good BRT (known as “gold standard” BRT) offers the following features that together create much better, faster transit:

These features would eliminate many of the challenges bus riders face every day such as long lines caused by cash payments inside the bus door, delays to facilitate wheelchair and stroller access, standing in pouring rain.

In metro Boston, the report issued by a BRT Study Group identified five corridors where BRT could have a significant impact on improved transit service and achieving transit equity across the region. Those corridors encompass all kinds of communities, including Roxbury, the gentrified South End, Readville, Charlestown, Cambridge and Somerville. The Dudley Square to Mattapan Square 28 bus route is one of the five most promising corridors identified in the report.

Light rail vs. BRT. One goal of BRT advocates in metro Boston is to get BRT into the conversation when transit options such as light rail are discussed, whether among community residents or policy experts or elected officials. There’s no question that BRT can be delivered much more cost-effectively than light rail, and faster.   According to the BRT Study Group report, for the cost of building 3.7 miles of light rail, we could build 25 miles of BRT, enough to cover all of the five priority corridors identified in the study. That’s 7 times more affordable. And BRT can be constructed much sooner compared to light rail. 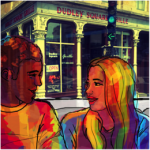 Two key service comparisons between BRT and light rail are ridership capacity and travel times. This is a major issue in the South End and the Dudley Square area of Roxbury. When the MBTA transit agency dismantled the old Orange Line running along Washington Street in these neighborhoods in the 1980s, the agency promised “equal or better replacement service”. That turned out to be the Silver Line elongated bus, which everyone agrees does not meet the promised standard. That is why many community activists advocate for light rail on this route.

Could real, gold-standard BRT meet the “equal or better” test? There is some evidence that BRT could beat the old Orange Line service and light rail. As the following chart shows, even BRT with the lowest projected ridership beats the Silver Line. If BRT on the Silver Line route can improve on the lowest projected ridership by 23%, then it can exceed the old Orange Line ridership. Research indicates that BRT ridership increases as population density increases. Roxbury’s population is booming, with a 17% increase last decade, and the neighborhood and city are poised to grow by 15% by 2030.

A second key service measure is travel time. As the next chart shows, compared to the old Orange Line, BRT would take 8 minutes longer from Dudley Square to Downtown, and the Silver Line now takes 18 minutes longer. BRT beats the Silver Line by 10 minutes each way. That’s over 86 hours a year saved for Roxbury commuters! 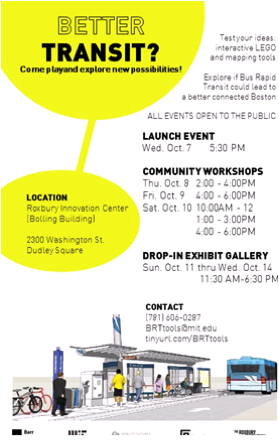 Putting BRT Into The Conversation. BRT is a legitimate contender for “equal or better” service for Roxbury compared to the old Orange Line. BRT is a legitimate option for any community desiring better transit and transit justice. To be sure, there are trade-offs when BRT is in place. Dedicated lanes may take away parking for businesses. Intersection light priority may cause delays for cars. Nuestra Comunidad and other advocates say, “Let’s have a conversation about these trade-offs.” Toward that end, we are co-sponsoring a BRT exhibit at Roxbury’s Bolling Building in Dudley Square. The exhibit features an interactive Lego exhibit designed by MIT’s Media Lab in consultation with a youth team organized by Nuestra Comunidad board Vice President Wesley Williams. The exhibit is a perfect place to see, discuss and even experiment with the benefits and trade-offs of BRT. Hope to see you at the Bolling Building!