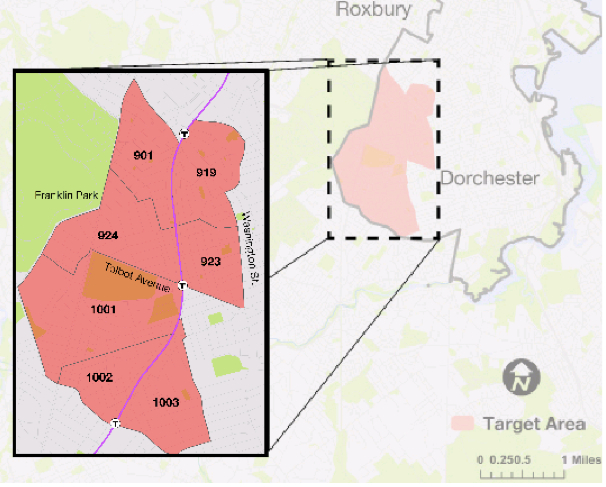 Seven tracts, nine benchmarks.  Commissioned by the Codman Square Neighborhood Development Corporation, the study, “Mapping Neighborhood Transformation: An Assessment of Susceptibility and Recommendation for Codman Square” was undertaken by The Boston Urban Symposium 2014, Boston University’s graduate City Planning & Urban Affairs capstone project focused on mapping neighborhood transformation. The study exams the seven core census tracts making up the Codman Square neighborhood, a community of 30,600 located south-east of Roxbury.  Like Roxbury, Codman Square is a predominantly low- and moderate-income and majority community of color.  The neighborhood lies between two major north-south auto corridors, Blue Hill Avenue on the west and Washington Street on the east.  The area is bisected north-south by the Fairmount Line, featuring a new heavy-rail transit stop opened recently in the heart of Codman Square on Talbot Avenue.  The study examined 2000 and 2010 census data and 2008-2012 American Community Survey data.

In order to assess the community’s vulnerability to gentrification, the study analyzed and mapped sets of population and housing data in order to identify specific sub-neighborhoods that might be susceptible to displacement by incoming residents of higher-incomes.  The study used these nine specific data benchmarks to define and examine susceptibility to displacement: 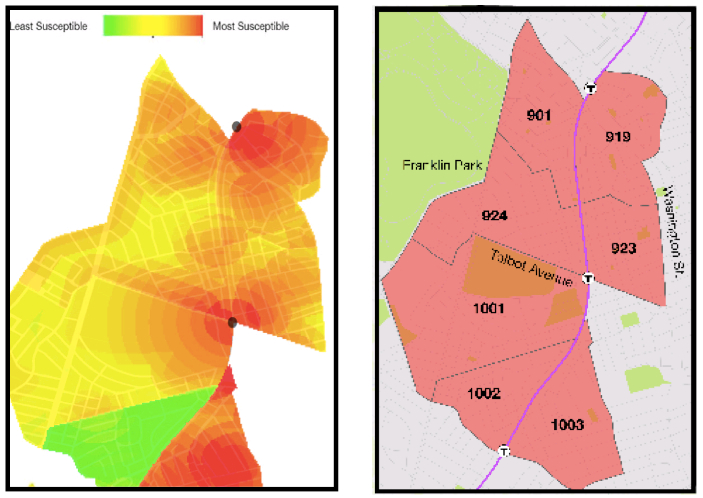 More evidence validating the Hartley benchmark.  To its credit the Codman Square report acknowledges the recent study by economist Daniel Hartley of the Federal Reserve Bank of Cleveland.  Hartley analyzed the proportion of census tracts in 55 major metropolitan areas that gentrified based on housing prices between 2000 and 2007 (i.e. tracts where average home prices moved from below the median regional value to above the median). Hartley concluded that Boston is leading the nation in terms of gentrification, based on the identification by his proposed benchmark of 36 Boston census tracts undergoing gentrification.  The Codman Square study, however, does not examine whether any of the census tracts studied are identified as gentrifying using Hartley’s single key benchmark predicting gentrification. Below is my comparison of the Codman Square study tracts, showing each tract, its susceptibility ranking within Codman Square and whether it is identified as gentrifying by the Hartley study.

As I have previously written, there is ample data in Roxbury supporting the predictive power of the Hartley benchmark.  By data, I included not only escalating rents and home prices, but the reported perceptions and lived experiences of residents in those areas.  Sources for some of this data are listed below.  Combined with the Codman Square study, there is a growing body of data suggesting a high predictive power for Hartley’s benchmark of median sale prices moving above the metro area median.

This is important because the Boston anti-gentrification movement so far has no real consensus on what anti-displacement strategies to adopt and where to target them.  Without a focused action strategy targeting the proven causes of gentrification and advocating for policies to protect identified at-risk neighborhoods, the Boston anti-displacement movement has little hope of success.  The City of Boston’s new definition of gentrification does little to add strategic clarity, a subject I’ll address in an upcoming blog.

To join in the discussion on understanding and fighting gentrification, check out the Right to the City coalition @ourcity and follow me @nuestradavid.