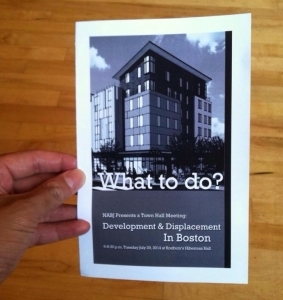 “Everything is on the table.”  That’s how Roxbury district City Councilor Kim Janey described the fight against gentrification threatening our Roxbury community and other Boston neighborhoods, following an historic city council hearing on this crisis.

Over 350 people jammed a hearing room in Roxbury on November 13 for a special Boston City Council committee meeting dedicated to the issue of gentrification.  Many attendees, including me, spilled into an overflow room with a simulcast screen.  Councilors Janey, Michelle Wu, Lydia Edwards and others referenced data showing Roxbury housing prices increasing 70% between 2010 and 2015, compared to a 36% increase for all of Boston.

Tenants eloquently spoke about their personal situations.  One long-time Roxbury resident described her struggles to pay $1,300 each month for a two-bedroom, with the landlord poised to raise the rent to pay for renovations. 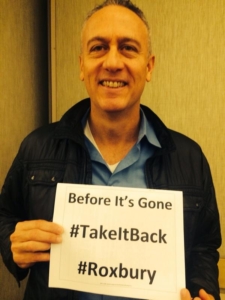 Board Secretary Alfonso Sira at an Anti-Gentrification Event

Many policy strategies were advanced, from land trusts to a speculation tax and a moratorium on all new development in Roxbury.  Reflecting the urgency of the crisis, Councilor Michael Flaherty suggested revisiting rent control, which had been abolished by a statewide referendum in 1994 pushed by corporate real estate interests.

The overwhelming testimony of residents and advocates was about the need for more affordable housing. There was a clear call for creative solutions:  “Everything is on the table.”  Here are four policy solutions Nuestra Comunidad proposes for Roxbury’s policy table.

1. Enact an anti-speculation penalty in order to keep the pressure on corporate gentrifiers. The Boston anti-gentrification movement has identified the real causes of displacement by focusing action campaigns against powerful actors who are carrying out plans inevitably causing displacement, such as Millennium and City Realty.  It is important to keep attention on these and other powerful corporate interests behind gentrification.  One way could be a campaign to penalize displacement, such as a tax penalty for speculation as proposed by the housing movement in San Francisco. It could be graduated, with the highest penalty occurring in the initial year, and then decreasing the longer a property is held until it phases out. 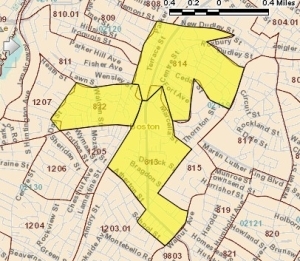 2. Enact targeted inclusionary zoning increases in TOD hot spots. The City has considered modest across the board increase in its inclusionary development zoning policy.  Stated very simply, in most neighborhoods the IDP program requires 15% affordability for private housing developments with more than 10 units.  The City probably feels that a significant across the board increase in the IDP percentage would discourage development.  However, there are some development hot spots where a significant increase would not stop development.  These tend to be concentrated about subway stops, including three Orange Line stops in Roxbury, and major bus stations like Dudley Square’s.  Why not enact a TOD overlay zoning plan with a much higher IDP requirement?  Nuestra and Windale Developers have already proven the two-thirds affordability concept across the 323 units at our Bartlett Station development, showing that developers can meet a much higher standard than 15%.

Residents and stakeholders at a Roxbury Strategic Master Plan meeting

3. Require tenant and advocacy representation on project review committees. As I have argued before, measures are needed to place more power in the hands of community residents opposed to gentrification.    A key “power strategy” could be to advocate for a city policy requiring appointment of tenants and low-income residents to development review bodies in proportion to their presence in the community.  The policy should also require representation of anti-displacement experts and advocates on every review body.

4. Incentivize developers to support “affordable retail.” Nuestra has heard from many residents and local stakeholders on the need for affordable retail rents. In our 135 Dudley and 40 Warren Street proposals (submitted October 13 to the City), we are proposing an affordable retail community benefit, the first of its kind for Roxbury, in order to maximize the opportunity for local businesses to operate and succeed in these developments.  This builds on our historic commitment to create spaces for local businesses in our mixed-use developments.  For example, at Bartlett Station, we have raised resources enabling the write-down of retail rents compared to the initial pro-forma rents required.

This is not by any means a complete list of what could work.  Let’s continue the conversation, identify the most promising and bold polices, and build a movement to enact them.  To engage with Nuestra, become a member and follow us on Twitter @nuestracdc and @nuestradavid.

About the Author: David Price