This month I received an online request from the Boston Tenant Coalition to sign a “Petition to Direct Inclusionary Development Funds and City Land to Meet Boston’s Housing Needs.”  The petition’s language asks the City of Boston to devote all new affordable housing resources (below-market housing units, cash payments, proceeds from the sale of city-owned land and free or discounted city-owned land) to benefit Boston residents making less than 80% of the area median income (AMI), or $75,520 per year for a household of four. 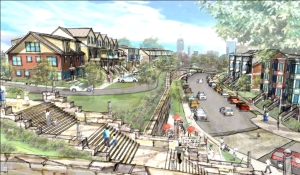 At first glance, it’s hard to disagree with this petition.  Clearly there’s an urgent need for housing that is affordable, defined as costing less than 1/3 of your income.  Both rental and homeownership housing are increasingly unaffordable in metro Boston.  In 2011, 51% of all renters paid over 30% of their gross income for rent.  By comparison, in the 1990s, this housing-burdened number had dropped to 39% of all renters.  Today, one fourth of all renter households are paying more than half of their gross income for rent, up from 18% in 2000.  Metro Boston is the second most expensive place to rent among U.S. metro regions—at $1,772 a month average rent—behind only New York and San Francisco.  In Roxbury, over 44% of tenants and over 40% of homeowners in Roxbury cannot afford their current housing.

Because I advocate for some new resources to build housing for Boston’s middle-income residents, I have to object to the Boston Tenant Coalition petition. Many middle-income people, who have incomes above 80% of AMI up to 120% of AMI, cannot afford housing in Boston.  This includes Roxbury’s 2,974 households with annual incomes between $60,000 and $90,000.

Here are my four reasons for opposing this anti-middle income petition.

Reason 1:  Our vision of Roxbury is of one community, with economic opportunity for people of all incomes and backgrounds.  We stand for:

Reason 2:  Middle-income Bostonians cannot afford today’s rents. In 2012 the Boston median rent was $2,250 for all one-, two- and three-bedroom rental units listed online.  A household would need an income of $80,000 or more to afford this rent, making rental housing unaffordable for households of three below 100% of AMI.  The necessary income to afford renting will keep rising in the coming years because rents are trending up: the metro Boston median rent increased by 13% from 2011 to 2012.  So it is foreseeable that very soon households above 100% of AMI will not be able to afford the median Boston rent.

Reason 3:  Middle-income homebuyers cannot afford Boston’s home prices.  In Boston, the 2012 citywide median sales price for one-family homes was $350,000.  To afford this home, a household of three would need an annual income of $93,000, placing them at 110% of AMI.  The income needed to buy a home will likely increase, because home prices are trending up: in 2012 median home prices increased 6% compared to 2011.  In Roxbury’s Fort Hill neighborhood, we’re already seeing sale prices of over $500,000 for new construction single-family home.  It is foreseeable that very soon households above 110% AMI will not be able to afford the median Boston single family home price.

Reason 4:  Some of Boston’s scarce local resources can only be used for middle-income housing. The 1 million square feet of small vacant lots owned by the City of Boston cannot be developed for low-income housing.  It’s just not possible.  Based on the rents paid by households below 80% of AMI, the City would have to contribute over $150,000 in construction subsidy per apartment in order to make the rents affordable on housing built on these lots.  The equity often provided by low-income housing tax credits, which would reduce the necessary City subsidy, cannot be used on small lot development. But these lots are just right for middle income housing.  A household of three with an income of $84,700, putting them at 100% of AMI, can afford the rent necessary to pay for the cost of construction.

In contrast, other City resources can only be used for low-income housing.  Much of Boston’s housing funds have federal sources with income restrictions capped at 80% of AMI, such as HUD’s CDBG and HOME programs.  For other sources, the City has flexibility.  Funds that it exclusively controls, such as inclusionary zoning and Neighborhood Housing Trust linkage program, can provide the modest subsidy needed for new middle-income housing for households between 80% AMI and 100% AMI.  These locally-generated funds could also support low-income housing production.  Why not do both?

Please join Nuestra Comunidad in urging Boston Mayor Marty Walsh to continue and expand the Middle Income Housing Initiative, so that the middle class in Roxbury and other neighborhoods can stay in the community, take advantage of new opportunities resulting form new development and investments, and avoid displacement due to gentrification.  To join in the conversation and advocacy, follow me on Twitter @NuestraDavid.