Three neighborhoods within Boston’s Roxbury community are at-risk for gentrification, according to a study by economist Daniel Hartley, published by the Federal Reserve Bank of Cleveland.  Hartley’s article has gained national attention in recent months for its analysis of neighborhoods in the 55 largest U.S. cities at-risk for displacement of residents through gentrification.  Using data from 2000 to 2007, his article concludes that Boston is the fastest-gentrifying city in the nation.  Nuestra Comunidad has analyzed the Boston census tracts deemed at-risk and mapped those in Roxbury, a working class majority-minority community of 48,500.

Hartley’s method for identifying areas at-risk of gentrification is to examine areas in the central cities of large urban areas with home sales values historically below the city’s median sales price.   Those areas with median home prices moving from below to above the city median home sale price are considered at-risk for future gentrification.  Hartley believes that housing prices are a good proxy for neighborhood amenities such as school quality and crime rates; changes in these amenities should result in changes in home prices.  I agree and suggest that home values could be considered both a reflection of, and a contributing cause of, other broader economic and social changes, including a rise in newcomers, residential rent increases, and higher commercial property values and rents.

A “key indicator”. The change from the bottom half of median home prices to the top half is not a form of gentrification; rather, it is a “key indicator” showing these areas are at-risk for future gentrification.   In a recent blog post, I propose to use Hartley’s key indicator as a “trigger” for local, state and federal government to invest targeted major resources and implement new policies designed to prevent or mitigate the displacement of tenants, homeowners and local businesses that can result from new investment and revitalization in at-risk neighborhoods.

So, what neighborhoods in Roxbury are at risk of gentrification using Hartley’s key indicator?  Below is an analysis of three areas, which include some that might surprise even folks familiar with the identified blocks. 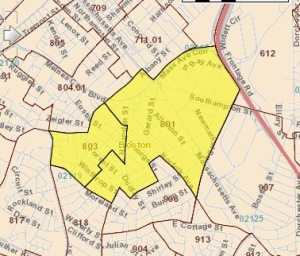 The Moreland historic district is located just outside busy Dudley Square with its high-volume bus terminal and quick access to job centers and universities.  The Moreland area is well-known in Roxbury for its well-preserved historic residential structures framed by gracious tree-lined streets, and large, attractive central park. There is a relatively high rate of homeownership here, and it experienced very few foreclosures during the recession. There is also a large volume of well-maintained restricted low-income multi-family housing owned by Nuestra and others in this district, proving again that affordable housing enhances property values (see citation below).  Nuestra has sold numerous homes in this area to first-time homebuyers since 1995.  Part of this at-risk district extends northerly into the Newmarket light industrial area with very little housing. 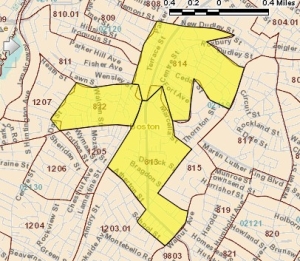 This cluster of blocks in the western half of Roxbury straddles the Orange Line subway line, with one side in the Mission Hill area of Roxbury and the other in the Fort Hill area running southerly to Egleston Square. The Mission Hill portion (to the west of the Orange Line) is a center of new housing in old factory buildings just north of the Jackson Square subway stop.  Students from the nearby colleges of the Fenway are driving up Mission Hill rents dramatically.  The Fort Hill side is known for the John Eliot Square district, a former center of colonial government, religion, revolution and abolition. Somewhat surprising is the inclusion of the southerly census tract closest to Egleston Square, as it experienced a fairly high rate of foreclosure during the recession.  It also has a large stock of affordable rental housing. 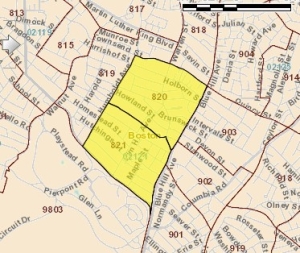 Identification of this Roxbury neighborhood as at-risk for gentrification is a bit surprising as it lacks some of the features of the other two neighborhoods.  It is not located near a transit hub, rail or bus.  It is relatively distant from the big job centers—the Longwood Medical area and the colleges of the Fenway.  It’s not known for an influx of new residents.  It does have significant assets, including gorgeous housing stock and the wonderful Franklin Park with its golf course and zoo just across Seaver Street. There is a healthy mix of owner-occupied homes and many restricted affordable apartment buildings. It’s a gem of a neighborhood that gets little attention from outsiders.  The data suggest that may be changing.

Warning signs for Roxbury.  The key indicator of local median home prices rising above the city median price has identified these three districts within Roxbury as at-risk for gentrification.  This key indicator is a harbinger of changes that could sweep more broadly across the community, potentially displacing many long-time residents and small businesses.

As I often note, the most recent census data reveals some of these changes already underway.  From 2000 to 2010, after decades of relatively flat population and housing growth, Roxbury added 2,200 housing units and 6,970 people, including 4,400 more whites.  By contrast, the nearby Dorchester and Mattapan communities showed lower growth in housing and a loss in population.

Roxbury is uniquely at risk for an acceleration of trends potentially resulting in displacement, by virtue of our location near the Longwood Medical Area, the colleges of the Fenway, the Boston University medical complex, and major transit hubs providing easy access to downtown and the booming Seaport, including the Dudley Square bus terminal and three Orange Line stops – Ruggles, Roxbury Crossing and Jackson Square.

Roxbury is attractive to new investment for another reason.  Institutional racism in the form of decades of urban renewal, redlining, predatory lending and disinvestment  created hundreds of acres of vacant land suitable for new development and an inventory of low-priced, beautiful housing stock.

A time for action.  What can be done to stop displacement of Roxbury residents due to gentrification?  New policies and resources must target and prioritize areas identified as at-risk for gentrification based on Hartley‘s key indicator – including the three Roxbury neighborhoods described above.  In my recent blog post I identify seven policies that could be part of a targeted community stabilization strategy in at-risk areas.  Here’s the short version of this list:

Roxbury stakeholders have an opportunity now to come together, create a shared vision for development without displacement and then organize to implement strategies to achieve that vision.  It will take a tremendous amount of work, but the community has the power to shape its own destiny and not be victimized by inequitable investment.  Across the country, promising anti-gentrification movements have begun with local convenings, forums and discussions among residents and businesses focused on the gentrification issue.  Let’s organize that kind of conversation in Roxbury, so we can build a movement for development with justice.