With gentrification a growing threat to American urban neighborhoods such as Roxbury in Boston, there is a growing discussion of the root causes of gentrification.  This is a good thing, as we cannot build a successful anti-displacement movement without aiming at the real causes.  Recent commentary centers around three theories, discussed below. A case study helps make the point that the right question is “who” causes gentrification, not “what”.  Strategic implications of the root causes include identification of displacement planners; creation of community-driven innovation plans; and advocacy for a stronger role by anti-displacement voices in development decisions.

Theory #1:  Individuals cause gentrification by moving into a neighborhood. 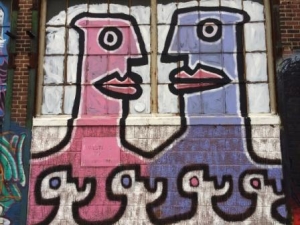 However, looking at the fundamental causes of displacement of local residents and businesses–the power relationships discussed below–it is clear that individual workers from the creative economy do not cause displacement by renting or buying in a neighborhood.  Their arrival may be a sign that gentrification will happen, or is happening.  But they are not causing gentrification, because they lack the power to do so.

Theory #2:  The invisible hand of the capital market causes investment and gentrification. 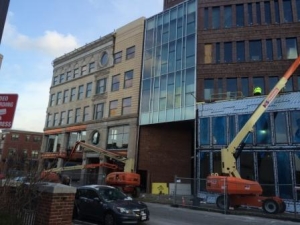 The Dudley Municipal Building under construction in Dudley Square

Some commentators suggest that the inevitable flows of the capital market creates gentrification.  As the gap grows between the current profits from land in a depressed neighborhood compared to the potential profits from development, capital begins to flow in to these areas in the form of new, higher-priced housing and retail.  As Guardian blogger Matt Bolton suggests, bohemian arts projects are sometimes aligned with this inflow of capital to facilitate the recycling of working class neighborhoods into gentrified ones.  This theory is incomplete.  It does not explain why displacement sometimes occurs years before the rent gap develops and spurs new investment, as resulted in Roxbury and other Boston neighborhoods through past urban renewal schemes. This theory misses the actual power relationships causing displacement.  Through the use of passive language (“transition”, “evolve”, “change”) the theory of the invisible hand of the capital market, like the theory of consumer choice, actually disguises the real causes.

What really causes gentrification?  More to the point, who causes it?  Gentrification is not the result of long-term historical or market trends and consumer choices, or the “invisible hand” of the market.  As powerfully described by geographer Javier Arbona, in each case of gentrification, we can identify a set of coordinated power-brokers at work over a number of years on policies of investment designed to produce displacement.  These power-brokers include banks, national real estate developers, insurance companies, brokers, transnational finance capital operating through large real estate investment companies, elected officials and planning, redevelopment and transportation agencies.  Their coordination often takes the form of a plan focused on an urban working class community, usually a community of color, and assigns to it a denigrating categorical description, such as “distressed”.  A case study illustrates these real dynamics of displacement.

A case study of power relationships. An example of a coordinated gentrification plan by a powerful class is the urban renewal plan for the South End neighborhood of Boston, historically a stronghold of Boston’s African-Americans and a predominantly low-income community, located next to Copley Square.  Developed in the 1960s by the Boston Redevelopment Authority and backed by the downtown corporate community, the plan called for demolishing “slum housing” in the South End and building high-end retail, corporate offices and luxury housing.  For 20 years the neighborhood successfully resisted the South End urban renewal plan, occupying the targeted land parcels and leading planning efforts to create a community vision for mixed-income housing.  The community ultimately won many of those battles with the creation of mixed-use affordable housing developments such as Tent City and Villa Victoria and other low- and moderate-income housing.  As of the mid-1980s, the upscale Copley Place Mall was the consolation prize for the champions of the 1960s urban renewal plan.

However, although housing advocates won some battles, the pro-gentrification class won the war. The capital flowing into luxury housing and upscale retail in the South End, starting in Copley Square in the 1980s and spreading out over succeeding years, swamped the stock of affordable housing. As a result, the South End’s demographics today show a sharp divide among the very affluent and the low-income, with 40% of South End households earning over $100,000 annually and African-Americans now only 13% of the South End’s population.

Were artists and creative types part of the story of the gentrification of the South End?  Absolutely, yes.  Many a developer cynically housed artists and sponsored galleries as part of their effort to market individual properties and neighborhoods.  However, artists were not central to the dynamics of gentrification.  That honor belongs to the banks, insurance companies, developers, armies of attorneys and city hall officials, supported by vocal homeowners, who fought for high-end development on every block and street corner of the South End.

What does this analysis mean for gentrification in Roxbury today?  One important lesson is to identify the power brokers and their plans for large scale luxury development in Roxbury.  As you read these words, developers backed by finance capital are surely generating plans for the Roxbury districts near mass transit stops, around the Ruggles Station, Roxbury Crossing and Jackson Square subway stations.  A community agenda to fight inequitable investment and resulting displacement should focus on prohibiting dense luxury transit-oriented development and mandating affordable and mixed-income, equitable transit-oriented development.  As noted in my previous posts, the experience of many affordable housing advocates is that dense luxury housing development has the greatest destructive impact in displacing residents of working class urban neighborhoods of color. (See urlin.it/59ad8)

Strategic implication #2:  Whose innovation plan is it? 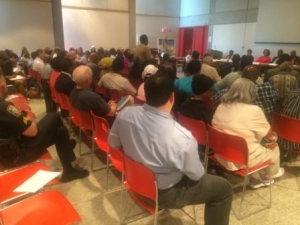 Residents and stakeholders at a Roxbury Strategic Master Plan meeting

Roxbury has already begun to create a community vision for innovation that is the polar opposite of the profit-seeking pro-displacement vision.  It is founded on the skills and talents of local entrepreneurs.  It recognizes the range of opportunities for business innovation in non-tech fields.  It values street-level innovation.  It sees local entrepreneurs and artists in the forefront of leading change and innovation, creating wealth for the community.  It sets the goal of tech innovation as putting technology in the hands of more people and growing a more diverse tech workforce, rather than displacing residents with a flood of existing tech workers.

Roxbury has a good chance to implement this vision, because the power relationships have changed since the fight against urban renewal decades ago.  Now some community residents are at the table with city officials and developers making decisions about transit and development projects.  Rather than reacting to plans for inner-city highways and luxury malls, community development corporations are now at the forefront of smart growth planning aimed at ensuring that residents benefit from development.  Many banks are now consistent partners in community development.  Roxbury leaders articulated a vision of community-based innovation in the 2013 mayoral election, and Mayor Walsh has embraced that vision and brought some of those leaders into his new administration.  (See http://urlin.it/540b2)

However, equitable development will happen only with a struggle.  In addition to anti-displacement strategies previously discussed in this blog (see urlin.it/59ad8), measures are needed to place more power in the hands of community residents opposed to gentrification.    A key “power strategy” could be to advocate for a city policy requiring appointment of tenants and low-income residents to development review bodies in proportion to their presence in the community.  The policy should also require representation on every review body of advocates of anti-displacement policies.  Under the current practice in Boston, low-income tenants and anti-displacement advocates are often absent from review committees, allowing voices to go unchallenged opposing the very measures needed to prevent displacement.

To join in the discussion around a new development review committee appointment policy, and gentrification and anti-displacement strategy, follow me @NuestraDavid.