Who Gets to Name a Neighborhood?

Who Gets to Name a Neighborhood?

In the battle around gentrification in big city neighborhoods, one of the front lines is the naming of neighborhoods. Even in neighborhoods with established identities, name changes can occur as part of gentrification. Sometimes this happens block by block over many years of signage wars. Or it can begin and take root suddenly with a branding campaign by big developers. When a name change takes hold, over the years more and more residents use the new name, because more and more residents are newcomers who were introduced to the new name, not the old one. Pre-emptive branding by the community is an alterative to signage wars and big development branding. Following are examples of each of these gentrification naming scenarios. 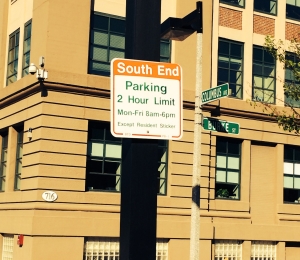 Signage wars.  In Roxbury we’re experiencing a long process of cultural gentrification involving city signage.  The photo below shows a street sign installed recently telling passers-by they are in the “South End”.  The only problem – this sign is in Roxbury.  This photo was taken in the Lower Roxbury neighborhood at the corner of Columbus & Burke.  The appearance of this new signage signals the continued expansion of gentrification from the South End—now a majority-white, long-gentrified community—across the Massachusetts Avenue border into Roxbury—a working class neighborhood where over half the population is African-American and 25% is Latino.

It is no coincidence that the signage pictured here is on a street adjoining the Orange Line, a block from the Ruggles subway, bus and commuter rail station and next to Northeastern University.  TOD (Transit Oriented Development) zones like this attract large market rate development that drives gentrification.

The signage picture sits six blocks north of census tract 814 in Roxbury, one of 36 Boston census tracks identified by a Federal Reserve Bank economist as beginning to gentrify during the past decade.  Based on that study, Boston is often referred to as the fastest gentrifying city in the U.S.  The sign’s own census tract, number 808, is not on that list of 36 because it passed the tipping point for gentrification a decade prior.

The transition of names from “Roxbury” to “South End” has been ongoing for years and is relatively gradual.  The community has consistently pushed back against this form of cultural gentrification, with battles around street signs alternating with post office designations, with disputes springing up regularly over the past 20 years or so.  The new resident permit parking sign wars is a continuation of this struggle against long-term cultural gentrification in Roxbury.  Without a more concerted resistance, the signage war in Lower Roxbury may be lost. 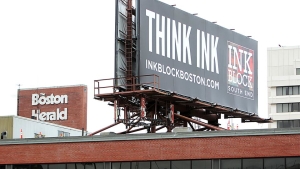 Big development branding campaigns.  Other name changes happen more suddenly than the gradual conversion of signs and postal designations.  One recent example occurred within the South End in an area formerly known as the New York Streets.   Urban renewal in the 1960s demolished much of the housing to make way for a newspaper printing plant, now closed.  A developer bought up the area and constructed a dense market rate housing development with a well-publicized and well-funded branding campaign.  Look at the billboard marking the area before construction, right beside highway 93.  The new neighborhood name:  “Ink Block.”  The well-to-do new residents living there now and paying $3,000 for a one bedroom know nothing about the New York Streets.  The Ink Block name is gaining currency even among many neighborhood old-timers simply because it’s an easy way to give directions.

Neighborhoods don’t have to sit back and wait for signage changes and pro-gentrification branding campaigns.  They can fight back by taking the offensive with their own marketing campaign.

Pre-emptive branding.  A community can mount its own marketing campaign to define and keep its traditions, history and name before pro-gentrification developers can put their own brand on the neighborhood.  Nuestra Comunidad is in the middle of such an effort in the northeast corner of Roxbury.

For the past ten months, a group of residents and business people from the neighborhood along the northern half-mile of Blue Hill Avenue have gathered to begin work on a neighborhood marketing effort.  The committee has selected the area outline in blue on the map below as the focus of their efforts to develop a positive and recognizable image for their area.  The neighborhood is between the well-recognized areas of Dudley Square, Grove Hall, and Uphams Corner and adjacent to the Moreland Street Historic District, within in the area outlined in the map below.  The goals of the effort are to: 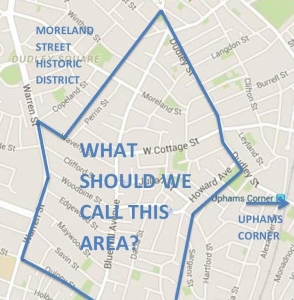 As there is no recognizable, commonly used name for the area, the participants decided to make a naming effort part of their campaign.  They are keenly aware that gentrification is moving toward them, as home prices steadily rise from Dudley Square moving through the Moreland Historical District in their direction.  Their neighborhood is particularly vulnerable to branding by pro-gentrification developers, as there is no established name.

These concerns are well-founded.  Part of this neighborhood is within census tract 801, one of the 36 Boston census tracts identified by a Federal Serve Bank economist as beginning to gentrify during the last decade.  The Moreland district is also in one of these 36 gentrifying census tracts.

High-cost housing has just arrived at Blue Hill Avenue, marking the first entry of new high rent apartments into the naming area.  Plans were announced recently for the redevelopment of an historic fire station at Blue Hill Avenue and Dudley Street into market rate rental housing.  Led by Dudley Street Neighborhood Initiative, neighbors have just won concessions for lower rents for some units for 5 years.  The building is the former home of La Alianza Hispana, the agency which gave birth to Nuestra Comunidad in 1981, when the neighborhood was blighted by hundreds of acres of lots vacant due to redlining, disinvestment and arson for profit.

Reactions to the naming effort have been mixed.  Residents within the area are almost universally supportive, while some folks outside of it are concerned and even opposed.  This reaction of concern is understandable, given the Roxbury community’s long experience with cultural gentrification through naming changes.  In this case, however, neighbors are launching a pre-emptive naming effort, to head off the pro-gentrification developers.  Some folks can’t believe that grass roots residents designed and led the effort.  Some folks think that support and facilitation by Nuestra Comunidad means Nuestra will make decisions about a name, which is absolutely not the case.